When the Courtmacsherry based Atlantic Whale and Wildlife Tours team embarked on their whale watching adventure in April 2018 they couldn’t be sure what the year would bring. Having years of experience with wildlife off the Cork coast they were confident that they would have regular sightings of cetaceans such as common dolphins and minke whales. However it was the iconic humpback whale that would go on to be one of the most regular and reliable cetaceans to occur in 2018.

Humpback whales are the most sought after of all the whales that visit Irish waters. This is likely due to the incredible range of behaviour that they exhibit.  For example they are one of very few whales species to “tail fluke” (raise their tails out of the water as they dive). They are also known for “bubble-net” feeding, “tail slapping”, “lunge feeding” and for their huge pectoral fins which can grow to over 4 metres in length making it the longest limb in the animal kingdom. On Occasion they can also be seen to breach fully out of the water, an event that any wildlife enthusiast would be keen to witness. 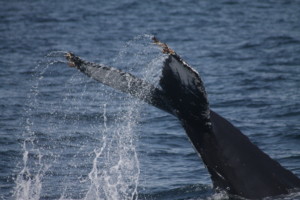 The very first encounter the team had with these majestic baleen whales was on May 17th and it would not be of just a single animal but of 3 animals together feeding south of Seven Heads. HBIRL79, HBIRL83 and another unidentified animal. Fortunately, wildlife photographer extraordinaire Mike Brown was on board to capture some of the action. This would start a run of humpback whale activity right through to October.

The next humpback whale encounter would be on the first day of July. HBIRL53 would become a regular visitor off Courtmacsherry being recorded on 4 more occasions during the month of July. 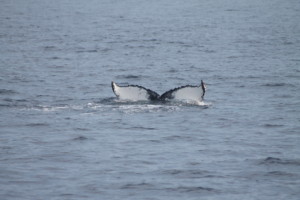 The image of a whale breaching fully out of the water is probably one of the most spectacular and well known in the world of wildlife watching. On July 10th 2018 the AWWT team would be treated to a spectacle that will live long in the memory of everyone who was on board the Lady Patricia. HBIRL90 or “Barnacle Bill” did just that on at least 6 occasions right in front of a gob smacked audience. Local photographer Joleen Cronin was there to capture this now famous image of our acrobatic friend. 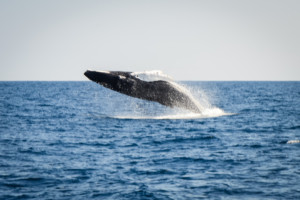 HBIRL90 Photographed by Joleen Cronin on an Atalntic Whale and Wildlife Tours trip in West Cork in July 2018.

On July 11th they would record their first sighting of HBIRL75. The most regularly encountered humpback off Courtmacherry in 2018. This animal would become very familiar with the Lady Patricia over the next 2 months. It became the real star of 2018. It was recorded on no less than 10 occasions in the months of July and August exhibiting all the behaviour that humpback whales have become known and loved for.

HBIRL75 would often “tail fluke”, “tail slap” and “lunge feed” within close proximity to the boat. On one memorable occasion in July the 14 metre giant was joined by 4 fin whales, numerous minke whales and hordes of common dolphins devouring a massive bait ball only 2 miles south of seven heads. (See image below). 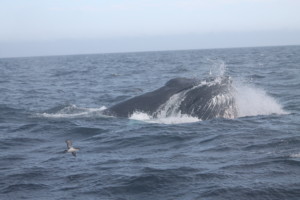 On August 3rd the team spotted another new animal. HBIRL73 was recorded at the mouth of Courtmacsherry bay putting on an incredible demonstration of lunge feeding. The animal would only tail fluke once in the 2 hour encounter. Luckily wildlife enthusiast Sean Cronin was on board to capture the event so that they could confirm the individual’s I.D. ( Cover Image)

At the very start of the 2018 season, Christopher O’Sullivan, guide with Atlantic Whale and Wildlife Tours had one individual whale in particular that he wanted to catch up with. “Boomerang” or HBIRL3 is the most well-known humpback whale to visit Irish waters. Getting his name form his habit of returning year after year he has become a household name with anyone who has an interest in cetacean activity along the Irish coast.

On August 30th 2018 Christopher’s dream encounter would finally happen. The unmistakable “Boomerang” would finally make an appearance off the Old Head of Kinsale. The AWWT team would be the first to encounter “Boomerang” in 2018 and it would bring to 13 the number of years that he has been recorded in Irish waters since he was first photographed in 2001 by Colin Barnes of Cork Whale Watch. 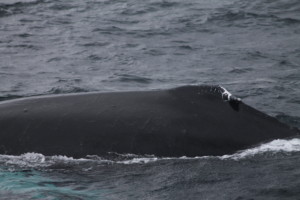 The humpback whale known as “Boomerang” or HBIRL3 pictured off Courtmacsherry by Christopher O’Sullivan on September 5th, 2018

All humpback whale sightings were sent to the Irish Whale and Dolphins Group’s sightings coordinator to help with their conversation efforts. The IWDG were instrumental in helping AWWT in identifying individual whales.

In total the Atlantic Whale and Wildlife Tours team would encounter 9 individual humpback whales on 21 separate occasions in 2018. This type of success rate puts Courtmacsherry up there as one of the best places to see humpback whales in all of Europe. Who knows what 2019 will bring?!