“Boomerang” is back in West Cork

“Boomerang” is back in West Cork

The clue is in the name. Ireland’s most famous humpback whale has returned for his 13th year since 2001 and luckily for whale enthusiasts in Cork he has chosen to hang out near Courtmacsherry bay.

On Wednesday, September 5th, 12 lucky people on a whale watching trip from Courtmachserry with Atlantic Whale and Wildlife tours were treated to a 50 minute display from this gentle ocean giant.

Guide and wildlife enthusiast Christopher O’Sullivan explained just how they came to realise they had encountered one of the first ever Humpbacks recorded in Irish waters . He said “I had an inkling it was our friend “Boomerang” when I saw the damaged dorsal fin for which he has become well known. However just to be certain we sent our images from Wednesdays trip to the Irish Whale and Dolphin Group and they have confirmed that this is indeed the most famous of Irish humpback whales, HBIRL3, AKA “Boomerang”. 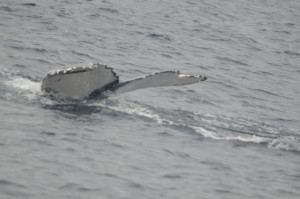 “His story is incredible. He was first photographed by Colin Barnes on the Holly Jo in 2001. Our sighting yesterday brings to 13 the number of years he has returned Irish waters in the last 18 years. It’s this habit of returning in late August almost every year that has earned him the nickname “Boomerang”. It makes him one of the most photographed and recognisable whales in Europe”.

Boomerang was also the apparent inspiration for the now iconic “whale tail” sculpture in Clonakilty. The irony is not lost on the Atlantic Whale and Wildlife tours team that that only a few days after the removal of this structure from the waterfront plaza, HBIRL3 decides to make his return to the West Cork Coast.

Christopher continued. “The ongoing flood defence works in Clonakilty has led to the removal of the very popular whaletail sculpture in Clonakilty which now lies damaged in a storage yard. This has annoyed and angered a lot of people who had become accustomed to it. Its amazing to think that less than 1 week after  the removal of the tail, the very animal that it was modeled on decides to turn up in West Cork waters.” 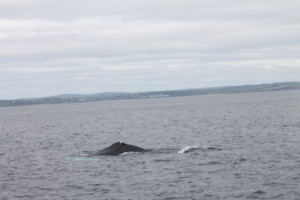 HBIRL3 OR “Boomerang” pictured on September 5th 2018 with Inchydoney Hotel pictured in the background. Photo by Christopher O’Sullivan

There are now over 90 humpback whales in the Irish Whale and Dolphin Group’s  Humpback Whale catalog.  In most cases it is impossible to sex these animals. However due to DNA samples taken of Boomerang by the IWDG back in 2003 we can safely say this humpback is indeed male. This is thought to explain his damaged dorsal fin which is believed to have been acquired by fighting within its breeding grounds.

If you would like the chance to see Boomerang and the other incredible wildlife in our area for yourself please call or message AWWT on 0879016534 for bookings or visit www.atlanticwhaleandwildlifetours.com