What an incredible Easter weekend. The Sun was shining, the sea was flat calm, and the humpbacks returned to our area.

Friday the 19th and Saturday the 20th of April proved to be very productive days for the AW&WT team. At times large numbers of minke whales surrounded the Lady Patricia to the delight of all on board. These underrated cetaceans are a joy. Their inquisitive nature saw them come within a few metres of the boat at times. Basking sharks and common dolphins were seen on these trips also in big numbers. One shark measuring an estimated 8 metres swam slowly beneath the boat at one point.

However it was the lucky punters who went out from Courtmacsherry on Sunday April 21st who were treated to the most sought after of whale watching experiences. Humpback whales! 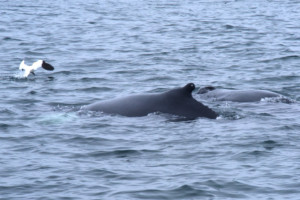 HBIRL 79, spotted on April 21st 2019 by Atlantic Whale and Wildlife Tours from Courtmacherry

At one point there were 3 humpback whales with the Lady Patricia. To the delight of the AW&WT team one was a familiar friend, HBIRL 79. This whale was first photographed by the crew in May 2018 south of Seven Heads.

The second animal was unknown to the team. However after sending tail fluke images to the IWDG they were able to confirm that it was a HBIRL74, a new animal for the Courtmacsherry based operators. They were unable to get a fluke shot if the third animal. 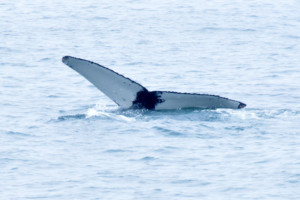 With the news that the activity is increasing off the Cork coast, interest in whale watching tours has jumped. People are advised to book early to avoid Disappointment.